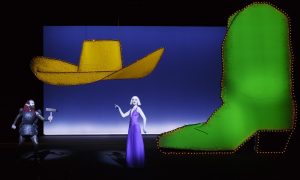 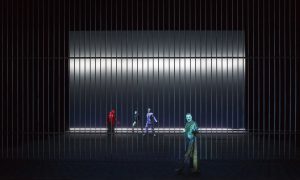 By Jon Fosse and Robert Wilson, based on the eponymous Old Norse mythology

To premiere in March of 2017 at the Norwegian Theater, Oslo, Norway.

Robert Wilson’s Edda is based on Norwegian playwright Jon Fosse’s interpretation of old norse mythology, the religion that dominated Scandinavia until the 11th century. The sources for our knowledge about this religion are different icelandic scholars and authors written poems from medieval time. Fosse read the “Old Edda”- literature, and gave it his personal form. He created a dramatic dialogue with strong musical and rhythmic qualities, moving the stories nearer to us while keeping them different and remote. In this production for Oslo’s Norske Teatret, Fosse’s fascinating and suggestive text meets the visual language of Robert Wilson.

The music for Edda was written by Arvo Pärt, the famous Estonian composer (see Adam’s Passion), and by the duo CocoRosie, who previously collaborated with Robert Wilson on Peter Pan (Berlin, 2013) and Pushkin’s Fairy Tales (Moscow, 2015), and most recently on Jungle Book (Luxembourg, 2019).

“In EDDA the Norse mythology comes alive in a way completely different from anything we are familiar with from traditional productions. … It is stunning, it is abstract absurdism and it is above all Robert Wilson.”— Dagsavisen

“EDDA is a Gesamtkunstwerk that spins through time in a absurd, beautiful and playful way … Two hours of a fantastic suggestive mix of exquisite pictures, burlesque and mythology.”— Svenska Dagbladet